The April 26 program was a presentation of Dr. Krueger's "Overview of the Coastal Bend Economy & Kleberg County".  This presentation was originally presented on March 6 at the Economic Forum & Luncheon at the Student Union Building on the TAMUK campus.  It was a very informative presentation with great insight to our local economy and how it compares to our neighbors, Jim Wells and Brooks counties.  We look forward to the second annual Luncheon next year.

Click here for presentation. (The presentation has been converted from Microsoft PowerPoint to Google Presentation. If there are format errors, please let me know so they can be corrected).

Vincent Capell - City Manager for the City of Kingsville, Texas

Our speaker for April 19 was City Manager Vince Capell.  Vince was hired as the city manager in April 2011.  He came to Kingsville from St. Joseph, Missouri, where he served in several capacities, including City Manager (9 years), Assistant City Manager, Finance Director and Budget Manager from 1990-2011.  Prior to public administration, Mr. Capell was an audit manager (1979-1983) for Ernst & Whinney (now Ernst & Young) before opening his own CPA practice (1984-1990).

At our meeting, Mr. Capell spoke about changes he has implemented in city operations, current and future city projects, and the city's financial standing. 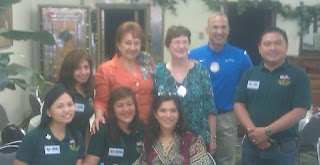 On April 12, the Rotary Group Study Exchange team from the Phillipines were our guests.  The team leader is Perfecto "Pitok" D. Sueno, Jr.  He is a CPA with numerous business ventures and a member of The Rotary Club of Marbel.  He has served in a host of Rotary positions, including club president (1986-1987), Assistant Governor (2007-2008) for District 3860 and District Secretary (2009-2010).  He and his wife, Lutchie, became Major Donors of the Rotary Foundation in 2010.

Our members of the GSE team are:

Temujin B. Ocampo - Temujin is a journalist, and he has been a news correspondent and anchor for more than 17 years.

Retrina Espe Fuentes - an attorney, who since passing the bar in 1999 has served in private practice, as a public defender and currently is a Government Prosecutor.

Jamila Balchand - Janu graduated from medical school in 2004 and finished her medical residency in 2009.  She is presently the school physician reliever at Ateneo de Davao Uninversity, a medical examiner for an agency that assists Filipinos seeking overseas employment placement and as a junior consultant at the Ricardo Limso Medical Center.

The Sunrise Rotary Club is a service organization working to improve our community. Weekly meetings are held on Thursday mornings from 7:00 to 8:00 at the Javelina Dining Hall on the campus of Texas A&M-Kingsville.

If you are interested in joining the Sunrise Rotary Club or would like to be speaker at one of our weekly meetings, just email us.